The world is on a path to vast shortages in , , lithium and other important minerals that are necessary to build the batteries in electric vehicles. So says Tesla’s(NASDAQ:) global supply manager, according to Reuters.

The comment comes as the electric car maker broke ground in Shanghai for its first overseas “Gigafactory.” Tesla’s first battery factory, in Reno, Nevada—the largest in the world—is still in expansion mode and aims to produce as many as 105 gigawatt hours (GWh) of battery cells and 150 GWh of battery packs by next year. All combined, that’s a lot of copper that will need to come down the pipeline very soon.

But some analysts now say that capacity isn’t quite there yet to feed global demand, and the industry could be running in deficit by 2021. Commodities analyst firm CRU Group expects copper supply to be short some 41,000 tons that year and 270,000 tons a couple of years later. Meaning: We could be looking at another commodities super-cycle, with the red metal leading the way. 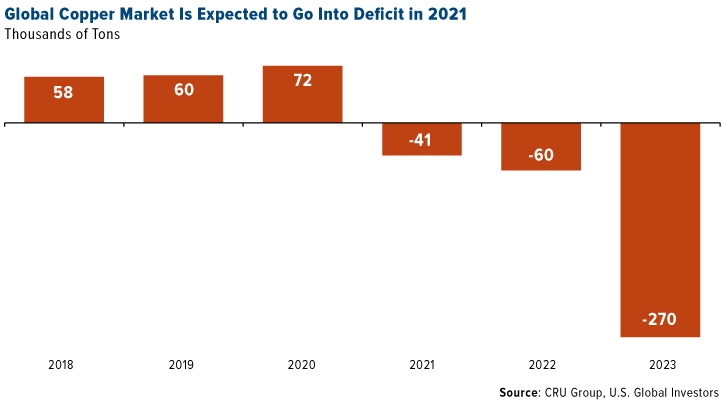 “You’re going to need a telescope to see copper prices in 2021,” my friend Robert Friedland, billionaire founder and executive chairman of Ivanhoe Mines (TO:), told us last year during a visit to our office.

I had the opportunity to hear Robert speak last week at the Royal Bank of Canada (RBC), where he explained that investment in metals and mining must increase to meet the unique demands of the future. I also caught up with Ivanhoe executive vice chair Egizio Bianchini, who previously served as vice chair and co-head of metals and mining at BMO Capital Markets. Robert and I are in agreement: The trend toward mass electrification—of everything from vehicles to renewable energy—favors copper, and investors might want to consider getting in now.

Ivanhoe remains my favorite way to get copper access. I own the stock personally. The Vancouver-based miner is nearing the start of production at its long-awaited, high-grade Kamoa-Kakula project in the…