According to data from NFT market analyst NonFungible, NFT sales have nearly tripled in value since Q3 2021, rising from a 7-day average of $16.8 million worth of sales, to just over $44.3 million.

The astronomical figure follows a surge in activity in the space that saw sales peak at $176 million per day earlier this year. World-renowned auction houses, Sotheby’s and Christie’s got in on the action, with the latter hosting the now-infamous Beeple Collection sale, raising a record $69 million.

Several of the largest players in the NFT space, including Cryptopunks and Bored Ape Yacht Club, continue to see spectacular sales, with Cryptopunks alone selling just under $15 million worth of NFTs on average over the past 7 days. Despite the market saturation, a new kid on the NFT block, Wicked Craniums is storming into the market, curating a dedicated fanbase. But what are Wicked Craniums and why are they so popular?

Wicked Craniums: The New Kid on the Block

Wicked Craniums are an NFT art collection hosted on OpenSea. Each piece is a skeleton-themed caricature that represents one of 10,762 “Craniums” belonging to a fictional island called Osseous. There are over 180 differentiable features that make each Cranium unique and highly collectible.

Hey my fellow WC community members. 🙏🥳🤙😀 Super excited for this project. We are Stronger Together!! @WickedCraniums #SkullsBackSkulls #skullgang #NFTCommunity pic.twitter.com/spooyKVhoo

Priced at 0.06 ETH (~$113.70 at current market rates), each Cranium affords its owners several features, including access to a members-only social platform called The Cradle, in which Craniums can share introductions, social media handles, and images. There are also a number of members-only projects that kick off as more Craniums are sold and each owner also has full commercial and use rights for each Cranium. 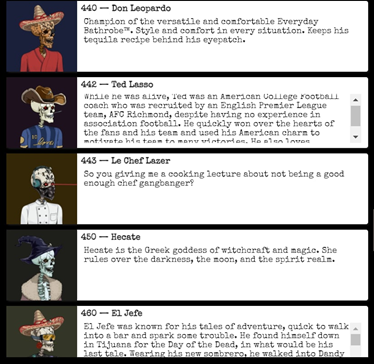 In late March, major South Korean cryptocurrency exchange Bithumb lost around $18 million as a result of a hack. While the details are still sketchy — for instance, it is unclear whether or not it […]

September 18, 2020 admin News Briefs Comments Off on This DeFi Group Wants to Bring Maturity to the Yield Farming Craze

The Chicago DeFi Alliance, launched in April, is poised to help members make a killing from the recent decentralized finance (DeFi) craze. So many billions of dollars worth of assets are now cycling through various […]